By minuartia
Posted 4 July, 2021
In Present
The action plan for controlling flooding in the Rec Vell – Ter Vell basin is completed2021-07-042021-11-09https://minuartia.com/wp-content/uploads/2015/12/logo-minuartia-ok.jpgMinuartia | Consultoria medioambientalhttps://minuartia.com/wp-content/uploads/2021/11/portada-rec-vell-ter-vell-des-20_v3-1-scaled.jpg200px200px

Within the framework of the PECT Project ‘Girona, Region Sensitive to Water’, promoted by the University of Girona, Girona Provincial Council and the Catalan Government, an action plan has been drawn up to control flooding in the Rec Vell – Ter Vell basin. Minuartia provided technical support to write the plan and undertake the participation process.

The plain defined by Rec Vell and Ter Vel, in the Bajo Ter basin, floods in storms. Reasons for the flooding include urban development and the construction of roads that intercept the torrents that drain the Montgrí massif. In the Ter Vell, drainage difficulty is increased by the rise in sea level during storms, which will increase in frequency because of climate change. Floods can affect urban areas and crops, mobility and other activities.

The plan, which consists of seven strategic axes and a total of 35 actions to be carried out by various administrations and public and private entities, defines guidelines and proposals to address flood management in the Rec Vell – Ter Vell system, including aspects such as the creation of wetlands that act as rolling areas, the improvement of water quality or the recovery of ecological connectivity.

The proposals have been prepared with the support of municipal technicians and other administrations, and the participation of entities and experts from the territory. 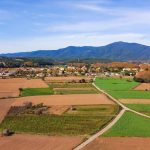