By minuartia
Posted 28 October, 2019
In News, Present
Presentation of the results of monitoring wildlife measures on the Barcelona-French border high-speed railway2019-10-282020-05-20https://minuartia.com/wp-content/uploads/2015/12/logo-minuartia-ok.jpgMinuartia | Consultoria medioambientalhttps://minuartia.com/wp-content/uploads/2020/03/odf_lav_728899_9955.jpg200px200px

Over a three-year period (2016–2018) campaigns to monitor measures for preventing and reducing wildlife impacts of the high-speed railway line (LAV) have been carried out between Barcelona and the French border, for the state railway company ADIF Alta velocidad. The conclusions were presented at the ‘Jornadas internas de ADIF-AV’ organized by the Department of Environment, held in Madrid and attended by project managers and technicians involved in the design and construction of LAV routes. At the meeting, knowledge from the monitoring campaigns was transmitted, which is the basis for improving future projects and construction techniques to reduce the impact of railways on wildlife.

The monitoring campaigns included evaluation of the use of some sixty wildlife passages and other transverse structures, including viaducts and multifunctional structures adapted to facilitate the passage of fauna, and identification of the factors that guarantee their use by species of fauna such as wild boar and roe deer. In addition, the effectiveness of perimeter closures as well as mortality caused by collisions and other factors were evaluated. A remarkable aspect was the identification of a wide range of fauna species that use the habitat at the margin of the road between the perimeter closures. Finally, the study highlighted the need to promote the maintenance of wildlife passages and perimeter closures to maintain the functionality of preventive and corrective measures.

The project has been carried out with the technical assistance of MINUARTIA.

In the following video we can see images about the wildlife using transverse connectivity structures of the high-speed railway line between Barcelona and the french border, during the monitoring campaign carried out using camera traps from 2016 to 2018. 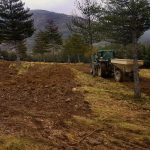