In April 2013, the expansion of the Conreria-Sant Mateu-Céllecs PEIN area in the Serralada Litoral was approved, to increase the protected area from 4,706 to 7,408 ha. The Barcelona Provincial Council (Diputació de Barcelona) has promoted the amendment of the Special Protection Plan so that it can be applied to the new extended areas. The work has been carried out jointly with the General Directorate of Environmental and Natural Policies of the Department of Territory and Sustainability, and the Consortium of the Parc de la Serralada Litoral, which manages a large part of the space and the extension areas.
Among other aspects, the amendment will facilitate the incorporation of new scientific knowledge generated relating to biodiversity in the protected area, to allow adaptive management in the application of the Plan. It has also made it possible to update the regulations to bring them in line with current legislation and incorporate new factors that affect the state of conservation of biodiversity.
The amendment has been drawn up with the technical assistance of MINUARTIA, through a joint work process involving the three relevant administrations, which facilitated constant discussion and helped agreements to be reached. 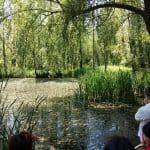 Analysis of public use of natural areas of La Garrotxa, CataloniaNews, Present